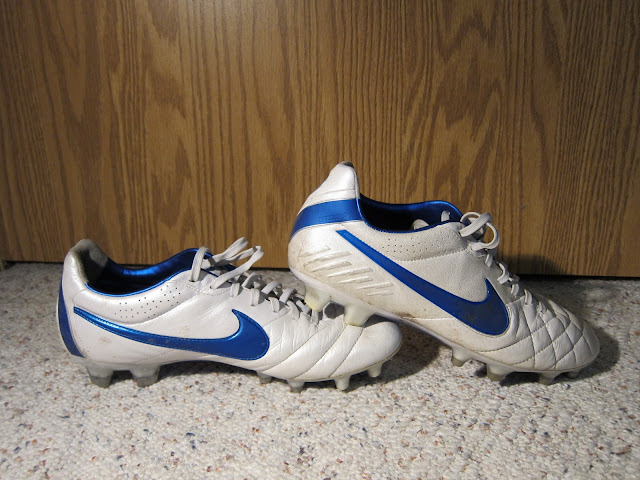 Marketing
These shoe was being advertised as Nike's lightest Tiempo Legend (other than the Elite series). It was going to be their first time using new materials on the model, simply it was meant to be a heritage boot with technological advancements. The Tiempo series is Nike's touch series. Pique was their main spokesman, but others such as Ashley Cole, Ronaldinho and Javier Hernandez have also been wearing the boots

Fit
I have been wearing the Legend IV for about eight months now. They were quite tight at the beginning but I still recommend you going for your true size. You want your toes to be as close to the end without touching. Because the front half of the shoe is a kangaroo leather, it will stretch nicely. The back is made of a kanga-lite so you won't have to worry about any heel slip, especially with the suede on the back. It isn't a wide or narrow shoe, I would rate it as having an average width.

Breaking In
I was able to wear these right out of the box into a match. That being said it will get more comfortable with time. It took about a week of one match and two kick arounds for them to form around my foot perfectly.

Price
They go for about $200 CAD at Canadian shops. You should be able to buy these for our own Xtratime/Soccer Locker. This has been the same price for the past four models over the past seven or eight years.


Positives
It was very important to me that they broke in almost instantly. Personally, nothing beats kangaroo leather (I even own the CTR360). It has superb touch and feel, the only boots that can compare to it in this category would be the adiPure, Mizuno Morelia and Umbro Speciali. The Legend IV once again has conical studs over a blades, which I find the most versatile.  It weighs 9.6 ounces which is lighter than the past. It's pretty light for a heritage boot but won't compare to a speed boot (ex. Puma V1.12, Mercurial Vapor, adiZero or Pele Trinity)  They are also very comfortable, my foot feels like it is meant for the boot. It is an average price for a pro boot on the market as well.


Negatives
Kangaroo leather boots are never as durable as microfiber materials. If you like playing in speed boots, this won't cut it for you. I used to play in Vapors and it took me a long time to transfer back to a heritage boot. It's almost a mental thing.


Conclusion
These are the best boots that I have owned to date. I love the touch, the design and the weight. It's perfect for the player who likes to take touches on the ball. I like them for running at players, making a bad touch is almost impossible. Boots don't make you a better player, but it does contribute to your game. You can really feel the difference. If you have any questions about these in particular, leave a comment.