I just saw these today at Momentum Marketplace. I am interested in the HUF "Choice" for skating. I am hoping it will feel like a Vans while riding. Other than the way it skates, it looks great! Black suede with a white midsole making it look clean (There are also other nice colorways). This is the first season for HUF footwear, they have introduced about four or five models this fall. I am assuming that the Choice will have good feel of the board but the durability will be much lower than the average shoe. It's still worth a try in my opinion.

Got a call from my high school basketball coach this weekend, basically telling me that he got me into some huskie basketball scrimmages this week. This suprised me a lot, because it is so soon. In my mind I was thinking maybe next year I could try out for the team and get my name out there, (maybe red shirt) but my coach is making it happen with his connections and all. Still a bit nervous even though I got nothing to lose. Going to give it my all and bring my A game, because the chance to participate in these events is rare. I will definitely make the most out of this opportunity!

Last night, Aashna, JJ, Dallas and I went to the last night of the Folkfest. The Folkfest offers a large amount of pavillions for different cultures along with one called Riderville. Riderville is a huge party for the Saskatchewan Roughrider fans. I personally disagree with this addition to the festival because Folkfest should be a chance to try and learn and experience cultures that you are not exposed to regularly.

The four of us went to the Caribbean Pavillion where we ran into a lot of friends and saw some performers. The only thing really cultural about this pavillion was the shows. There was not that large of a Caribbean crowd which had disappointed me a bit. I didn't get around to it, but there was good drinks and food such as one of my favorites, jerk chicken. Next year I am going to definitely go again and make sure to go to a few other pavillions.

Last night Aashna took me to the Michael Buble concert. She had gone the first time he came to Saskatoon, approximately three years ago. She talked him up a lot, telling me that he was a great performer live because of his singing and his sense of humor. Buble also had the same opening act as last time, a New York group called Naturally 7. They did not use instruments, but rather made noises with their mouths to impersonate them. This video will give you a feel of what they are capable of producing.

Michael Buble on the other hand was exceptional. His singing sounded as nice as it did recorded. I did not know too many songs by him considering that a lot were older remakes and I have not heard his most recent album. But his performing was great, it was filled with dancing and laughs. He promised to come back to Saskatoon, so next time he does, make an effort to try and see him.

The Fringe unfortunately ended last weekend. Out of the estimated nine days it lasted for, I was probably there atleast six times. My favorite thing about it is that it gives artists of different types to express their talents to the city. It was pretty similar to the last few years: acts, food and market. I did my regular routine of wondering around and grabbing samosas from the Bulk Cheese Warehouse and spring rolls from Norm's.

If anyone had spent time at the Fringe, I hope they saw my homies Derek and Trevor from Single Second. They were hooking everyone up with their tees at great prices.

Recently I joined the U of S's campus rec soccer league. I am planning on helping them finish the season with a few games and possibly play offs. It is fun and it is helping me get back into the soccer routine. The league consists of all skill levels from Huskies Alumni to first timers. As of now, I have played two games and it has been a lot of fun. I hear that most campus rec leagues are great so if you go to the U of S try to join a team.

A while back I sold my truck, this is it's replacement. 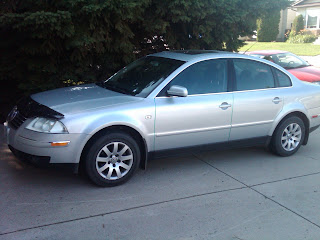 Posted by DSIEMENS at 4:58 PM No comments:

Last week you could find the Hello Saskatoon crew chilling at Silverwood Golf Course. With the weather starting to get better, we all had an awesome day soaking up some rays, while enjoying each others company. Thanks for the good time boys! 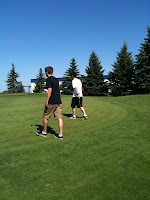 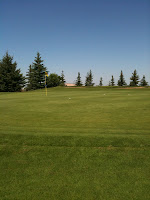 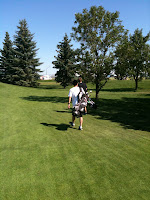 I have been told that I go out to eat too often. I also realize that I am not the best cook, so Saturday evening I wanted to start off with something easy and fun. Aashna and I made a stir fry together, it was easy to prepare and a good meal. No, I don't do catering.

Everyone go out for dim sum with your family on a Sunday morning and get yourself some BBQ pork buns.