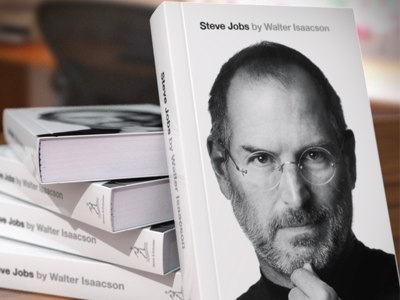 Most people I think recognize the name and face on the cover of this book here. Steve Jobs is the founder and visionary behind Apple Inc. and also Pixar Animated Studios.

In the 70's when computers were so complex that only computer geeks and businesses had any use for them, Steve had the vision that computers could be made simple and friendly enough for everyone to use. With that vision Steve Jobs and his buddy Steve Wozniak create Apple Inc., which I'm sure everyone is familiar with today.

Mac computers and iPods are cool and all, but what's really great about this book is how interesting of a man Steve Jobs is. You may have heard about how Steve was a perfectionist, had to micromanage every aspect of a product, and was hard to get along with, but you really don't know until you've read this biography. Dare I say, Steve Jobs is The Most Interesting Man in the World (Sorry Dos Equis Man).

Steve Jobs may have been arrogant, ruthless, disrespectful, and dramatic which makes him extremely difficult to deal with. But at the same time he was inspiring, motivating, alluring, and just outright brilliant. The biography follows his entire life, highlights include: experiments with LSD and acid as a teenager, trip to India to find his "guru", personal rivalry with Bill Gates, unique management style, and his dramatic departure from Apple in the 80's and later his return.

I'm only half way through the book but it's been quite the joy to read so far. If you're looking for something to read this summer, give this book a shot. It is quite captivating.

Here is one of my favorite passages from the book:


A few weeks later he called Bob Belleville, one of the hardware designers on the Xerox Star team. "Everything you've done in your life is shit," Jobs said, "so why don't you come work for me?" Belleville did, and so did Larry Tesler.