I met Andrea An once before -- I think it was sometime in 2011 through a mutual friend -- and I had no idea she was a singer; let alone a Youtubing singer. Even more recently, I saw someone tweet about a live broadcast on an Ustream type site. She and her friends were casually performing for whoever happened to stop in. Now my story is caught up to the present time, where I noticed another mutual friend commenting on a newly uploaded cover of Beyonce's "Halo" performed by Andrea on Facebook. Talk about networking. The cover is actually pretty good considering she is only using a single microphone in an ordinary room. The song starts picking up around the one minute mark. So you don't have to wait long before you realize what she's all about. It's also an acoustic cover, I thought I'd mention that if you haven't hit play yet.

I'm not exactly a long time fan of hers but what has me geeking out, and is consequently the reason I'm doing this post, is her Youtube account. I've been on Youtube for a very long time and I've watched the likes of AJ Rafael and Passion thrive for years now. It's very surreal seeing someone in Saskatoon do what they're doing and do a good job at it. Below there are two covers that really strengthen my belief in this girl. Most importantly for me, I liked Drake's "Marvin's Room" and it spawned a ton of covers on the Internet. The problem with those covers is that not many people swore in the song. Oops, the word they're not saying isn't the F-word but the other one. Anyway, she performs Jojo's version almost flawlessly. It's a shame it's so short. The most prominent cover she has done (to me at least) is of Adele's "Someone Like You". Trust, it's a tough, tough, tough song to sing. It's about wishing your former lover to find happiness with their new relationship and not to forget you. Instead of blowing your soul out of your body like Adele does; Andrea's voice is much softer, obviously less powerful, and more delicate.

You may not agree with everything I've said but music is one of the most subjective art-forms in the world. I like what she's doing and I hope you do too.

Below, you'll see "Coming Home" which is Andrea's first official single and it's available for purchase via iTunes or Bandcamp. She displays her ability for song-writing and it's a fine one at that. The structure of the song is properly organized, and sonically, it gives you a better understanding of her voice and style. 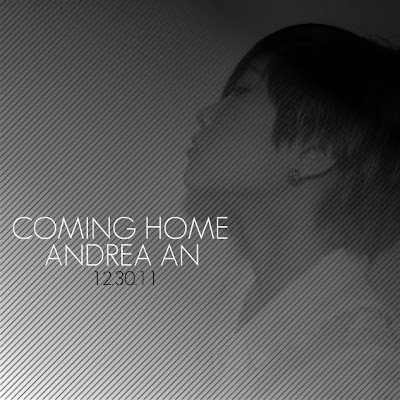