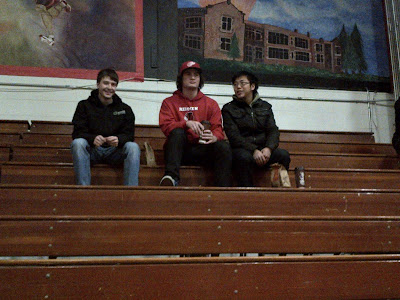 Bedford Alumni that braved the early morning to support their Redmen in the 8am game! That's serious dedication! BRIT > Sleep, enough said!
This recap comes a little late because I spent most of my day recovering from the notorious "BRIT hang over."

Morning started off bright and early with the 8:00am Red Eye Opener, followed by a couple more games of the latter place games. At noon the BRIT Cheerleading/Pom competition began, with the home team Bedford Road taking first in the Cheerleading competition and Centennial winning the Pom competition. Congrats to both teams!

The consolation prize for the basketball side of things went to Riffle from Regina. Fan favorites Garden City Gophers topped Paul Kane to take home third place. Their second third-place finish at BRIT, the last time was when BRIT-Legend Jarred Ogungbemi-Jackson (better known as Okababy-Jackson) played for the Gophers in 2008. #2 Jayel Masangkay of Garden City earned himself a spot on the BRIT all-star team with his speed and tenacity on the court. It doesn't hurt that he isn't shy about doing back flips to entertain the crowd either!

The Finals featured Scots College from Australia taking on the defending Champions St. George from BC. The stands was packed and the fans were split basically down the middle: females cheered for the Aussies (for obvious reasons) and males cheered for St. George (out of jealousy). #7 Patrick Emery of Scots College stole the show, hitting eight three-pointers, carrying his team to the win and the earning himself BRIT MVP honors. Congrats to the Scots College Lions their first ever BRIT championship!

The Finals also featured another brilliant performance, this one from the mysterious 'Red Man'. Red Man pulled out the Michael Jackson costume and dance moves, the cowboy outfit, the hockey player outfit, and trolled the whole gym by leading us all to believe he was going to reveal his identity, only to have another red suit under... still mad about that one! 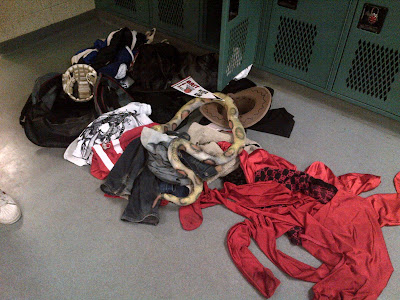 Red Man's props and costumes he used during BRIT. Crazy thing is this is about 1/4 of the props he had in the locker room. (Yes, that is a fake snake)

That marks the end of another BRIT tournament. If you were apart of BRIT this year, I'm sure you had a good time. For those that didn't get a chance to come out, the good thing is there is always next year! See you all at the 45th BRIT Classic!