Just a Taste: The Rook and Raven

Location
The Rook and Raven is located at 154 2nd Avenue.

Environment
The Rook and Raven is a lounge styled restaurant. It is very nice, using chalk for drink menus and wooden menus. The restaurant is quite long and narrow with TV's and a bar at the middle and an assortment of different seating from the front of the restaurant to the back.

Menu
The menu wasn't big but they offered a variety of appetizers, entrees and salads. There were wings, cheese platters, steak, sandwiches, burgers, fish and chips and desserts. The meals start at around $10.

Food
I ordered the loaded burger with fries. In my opinion it was cooked mediocre but the seasoning on the patty was good. The ingredients were fresh and the presentation was nice. There were a lot of fries which was nice but they were very salty, salty enough that I could visibly see the grains of salt. That being said, I left the restaurant being full for $11. 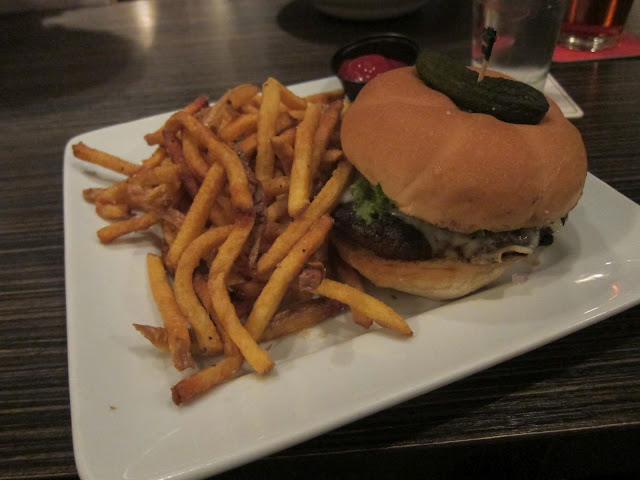 Conclusion
According to Urbanspoon many people had a better experience than me, which makes me want to give the restaurant a second chance. The prices are a bit higher but the restaurant was really nice. Our server started out polite but as time went on he became a bit irritating by being pushy and rushing us. I feel like I may have just gone on a bad day, so I hope to do another Just a Taste on The Rook and Raven in the future.