This year, Capital One Canada, Just for Laughs and ourselves are hosting a contest for those of you in Saskatoon (this is a Saskatoon promotion including gifts specifically for Saskatoon citizens). This contest is to help promote the Capital One Canada and Just for Laughs show that is coming to Saskatoon. Show your appreciation by giving their Facebook pages a "like". Underneath is going to be some important information on how the contest will work.

Who
Like it says up above, all three of us (Capital One Canada, Just for Laughs and hello saskatoon) are coming together to provide a little contest for our readers.

Why:
It only takes a second of your day to share and re-tweet and you might be a winner of a gift basket. It includes the following things: 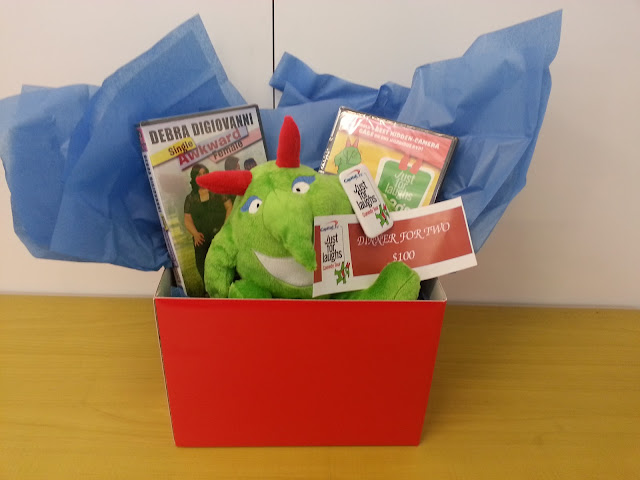 Did you know that 41% of Canadians said they're laughing all the way to the bank when their e-bank statement shows that they have more money than they thought? Well maybe this gift basket will make you feel the same way.

No purchase necessary. Open to Canadian residents (excluding Quebec) who have reached the age of majority in their province or territory. Enter the Capital One x Just for Laughs x hello saskatoon Contest for your chance to win a Laughing All the Way to the Bank give away package worth approximately $125 CDN.  Prize packs include a $100 gift card to a local restaurant, a Just For Laughs Gag DVD and a DVD featuring one of the tour's comedians and a Just for Laughs mascot plush toy.  Any part of the give away package may be substituted for one of equal or greater value.  To enter, read the "What" section. Contest opens right now and closes November 14, 2012 at 11:59 p.m. Central Standard Time. Chances of winning depend on the number of eligible entries received. Skill-testing question required.

Also, there is a another contest called the Standup Stand-off. You simply watch the videos on the link and choose your favourite comedian. While you're doing that you may as well enter to win a LG entertainment bundle or one of the other fun gifts. This contest will be running to November 14, 2012 as well!